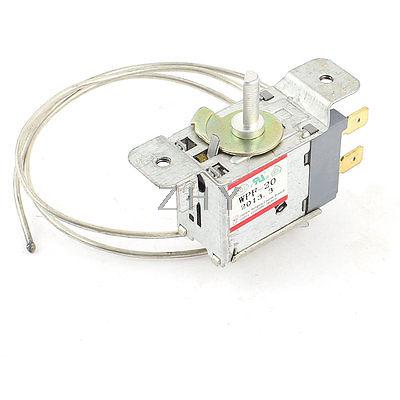 What is a Fridge Thermostat ?

A refrigerator thermostat is essentially the controlling component of a refrigerator cooling system. It often looks like a dial or, in more modern appliances, a digital read-out that tells owners how cold the appliance’s interior is and allows that temperature to be shifted up and down.

The thermostat itself doesn’t usually change the temperature, but it relays the ideals and desired parameters to other parts of the compressor and main cooling system to achieve uniform and consistent results.

In most cases, these systems work by removing heat from the refrigerator compartments rather than making the air colder. The thermostat acts as the regulator during this process and plays a very important role when it comes to triggering the start or end of air movement.

Thermostats are usually located inside the refrigerator and have a knob or control panel that allows users to adjust them. Most older appliances have just one thermostat for the entire device, but some newer models allow for different settings in different areas: users might choose to keep the main chamber cooler than one or more drawers, for instance.

Once a user sets the desired temperature, the thermostat maintains that temperature by sensing internal fluctuations and prompting the compressor to turn on or off in response to those changes.

When the refrigerator is appropriately adjusted to the designated temperature, the thermostat stops the flow of electricity to the compressor, effectively stopping it from cooling the appliance.

How the Whole System Works with the Fridge Thermostat

The compressor is the engine of the cooling system. About the size of a football, it includes a pump and motor in a sealed compartment where the refrigerator cooling liquid, called refrigerant, travels. When the thermostat detects too much heat, the compressor turns on and begins transforming refrigerant from a low-pressure gaseous state into a high-pressure gas.

The refrigerant gas moves from the compressor to the condenser, where it becomes a liquid that gives off heat. The liquid refrigerant is then forced into a capillary tube, which controls the pressure and flow.

When the liquid refrigerant reaches the evaporator, it loses pressure and changes back into a gaseous state. This transformation from liquid to gas absorbs the heat in refrigerator, resulting in a cooling effect.

It’s important to distinguish a refrigerator thermostat from a defrost thermostat, which works with a refrigerator’s automatic defrost feature. Most modern refrigerators defrost automatically, meaning that frost or frozen water accumulated inside the refrigerator melts away without the need for a special device.

Frost is common in appliances where the desired temperature is right around the freezing point. If the air doesn’t circulate fast enough or thoroughly enough, patches of ice can form.

The defrost thermostat is typically placed near the cooling coils and prompts the defrost heater to turn off when the heat near the coils has reached a specific temperature.

There are some situations in which an external refrigerator thermostat might be used, often as a way of more precisely controlling the internal environment. These sorts of devices are portable and usually come as a few connected pieces.

A temperature control dial and a probe are usually placed inside the refrigerator, and the refrigerator itself is then plugged into the external thermostat, which overrides its internal controls. A review panel on the outside lets observers monitor the internal conditions.

This sort of set-up is desirable for people who want to control the temperature precisely without opening the doors, since this naturally changes the temperature and also introduces outside air.

People who make beer and ferment cheese are two of the most likely customers for this sort of product. The refrigerators aren’t opened in these cases until the product is done, and they aren’t usually shared with different food or other perishables.